In October of 2011 I was making my way down the over grown trail that leads to the feeding station on the Public Land research area. I come upon a small group of White Tail Deer. The deer did not spot me so I stopped and quietly watched them for approximately 10 minutes.


They eventually moved on and I continued toward the feeding station. I have discovered that the Bigfoot will routinely peek at you when you have your back turned or sneek up behind you. So I always mount a HD video camera on my shoulder recording behind me when I go into the field. When I returned home and reviewed the back trail footage I discovered that I may have interrupted a Bigfoot on a deer hunt! 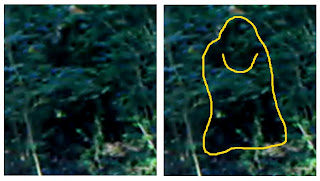 Squatted down behind me in thick vegetation was a very ugly Bigfoot. I think his features were made to look this ugly because of the angle of the sun and it's deep set eyes. I caught images of the entire body and the face. I captured three different angles of the face as I was walking over the uneven terrain.

The first images were the best but only showed half the face. 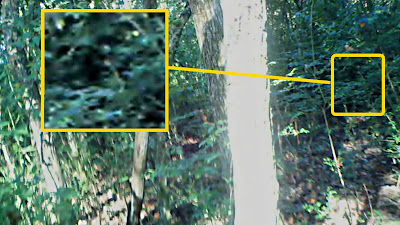 The second time I captured images most of the face and the body can be seen. The deep set eyes make the Bigfoot look "goolish" in these frames. 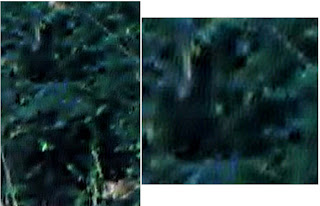 You could also see eye shine as the sun light reflected off the eyes of the Bigfoot as I was walking.

You can also see facial movement during the video. Below is an example of eye and forehead movement.

I am working on a YouTube video that will be posted soon.