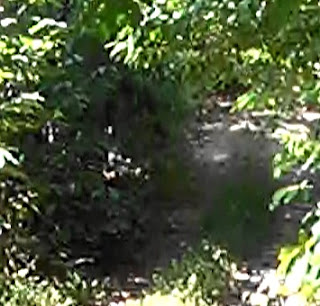 This video was captured in September of 2016. I  was camping with his family at a local campground and decided to take a walk in the nearby woods. This area has a history of odd occurrences and I captured video footage of a Bigfoot in these woods back in the summer of 2010. While walking I was taking video on my back trail camera.

I captured a “predator” like distortion and as I walked father away from the anomaly two entities began to materialize. One entity was on the left side of the trail in the dense foliage while a second smaller entity was in the middle of the trail. The entities manifest and become more defined but they remain translucent through the entire video.

These entities go from cloaked to visible during the video. This could be the first time the phenomenon known as a “portal” has been captured on video. As I walked away from the anomaly the outline of the event horizon can be viewed. The portal was in the shape of a circle.
Posted by Joe Black at 9:46 PM 3 comments: