Possible Bigfoot in The Shadows

On August fifteenth I ventured out to my public land research area with my brother in law.  We were walking the edge of large soy bean fields and I was filming to my left into the thick woods. While filming I captured a few seconds of what appears to be a possible Bigfoot that was lurking back in the thick foliage. I am still working on the video footage to post at a future date. In the meantime I have prepared a preview of still captures from the video. Is this a Bigfoot or just a shadow?

Say hello to my Little Friend 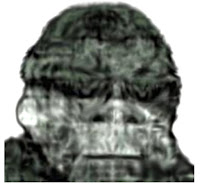 Infant Bigfoot, Little Person, Troll, Gnome, many ideas about the identity of this creature have been put forward since the I first posted this video. This video intrigues me to this day. Critics have tried to say this is no more than a common animal but its physical appearance, movement, and behavior completely rule that possibility out. 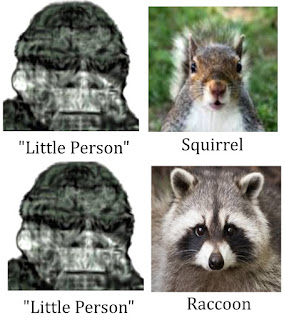 It is a very interesting fact that the little creature managed to avoid the triangulation of three cameras by apparently going under the Passive Infrared Sensors. The only location that it could reach the food and not set off the cameras is where he is located in the video.  This is extremely interesting.  It was also interesting to note, that on the black and white camera that did capture it, the creature is at the edge of the cameras focal area. 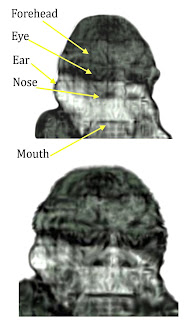 No other camera captured ANY footage of anything on this day. No small animals, birds, insects, deer, NOTHING! If this was a mere squirrel how did it manage to avoid the other three cameras completely? Why would a small animal even be concerned with or know that there is a camera present?  On other days the cameras had captured squirrels and other small animals, but not one single animal on this day.

Five years after capture of the video, I think that this most likely an infant Bigfoot.
Posted by Joe Black at 7:40 PM 5 comments: