I first talked to Mary Green in February of 2011. Bobby Short was able to introduce us because I had encountered a Bigfoot clan near where the Carter Farm was located and wanted to talk to Mary about the Bigfoot possibly being from the Carter Farm Bigfoot Clan. The Carter Farm was the subject of Mary’s ground breaking book  “Fifty Years with Bigfoot: Tennessee Chronicles of Co-Existence”.

Mary and I had an instant connection and talked for several hours over the phone. She was also kind enough to autograph and send me a rare copy of  “Fifty Years with Bigfoot: Tennessee Chronicles of Co-Existence”.

Mary was truly a great pioneer in the Bigfoot Research Arena. She broke new ground and confounded the experts many times. She was unfairly attacked over the years because of her experiences. In the early years she was criticized by the Bigfoot Research Establishment because she reported that the Bigfoot in Tennessee looked human in appearance and had round heads. This drew sharp criticism and scorn. Mary was also taken advantage of by several well-known names in the Bigfoot Research World. Many you would know if I named them. So much of what we know now about the Bigfoot can be attributed to Mary’s tireless research.

Her vindication finally came when the Sasquatch Genome Project’s DNA Paper was published. In the Spring of 2011 I went to visit Mary Green in her home. We had a great time, we watched videos, shared stories, and talked Bigfoot. During our conversations I had ask her if she could spare a few hair samples for the DNA Project (aka Sasquatch Genome Project and/or Ketchum DNA Study). She said she would think about it and we continued to talk and visit. When it was time to go, I said my good buys and was walking out the door when Mary said “wait, I want to give you something”. She went back into her bedroom and came out with a white three ring binder. She handed it to me and said “Here are all my Bigfoot hair samples that I have kept, I want you to send them to Melba. My daughter and son in law have found many of the recent samples. All I ask is that you give them and me credit in the paper. I want people to know where they came from.”

Inside this folder were dozens of hair samples. Everyone meticulously labeled with the date found, who found it, where it was found, and the circumstances around the discovery. I tried to give it back to her and suggest I just take a few hairs from the abundant samples, but she refused. “No, No, I want them all to go in the study. I know these are real Bigfoot hair, and I want everyone to know I was telling the truth all these years, that I was not crazy or paranoid. Grumpy, Fox, all of them are real, and you have the proof in your hands, just please give us, my daughter and her husband the credit they deserve for collecting these samples.”

Amazingly I left Mary Green’s home with all her hair samples, her work, her legacy entrusted to me and to the DNA Project. I sent the hair samples off to Dr. Ketchum to be tested. I did however, pull hairs out from several samples and send them back to Mary. I just could not take them all. A few weeks later I get a call from David Paulides telling me every sample Mary had was “pure gold”. They all were Bigfoot and one sample was possible “Dogman”.

Later when the DNA Paper was published Mary would have her vindication,  her samples played a major role in the paper. Mary had other DNA test done on hair samples in the past dating back to 2003 and the DNA Paper confirmed the previous work done. That the creature known as "Bigfoot" was in fact a human hybrid. We talked after I sent her a copy of the paper and she was very and satisfied that her work had been both verified and vindicated.

I was blessed to know Mary and to be a friend if only for a few short years. Like with the passing of Bobby Short and Chuck Prahl, we have lost another legend, a pioneer. Mary embodied what is a true “Bigfoot Researcher”. She will be missed. God Bless you Mary, thank you for all the years of tireless devotion to your research. Rest in peace Bigfoot Lady.
Posted by Joe Black at 10:23 AM 7 comments: 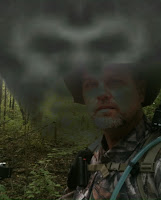 In this episode I take the viewer to the "Public Land" research area. This is where my research began back in 2009 with my first experience with a possible Bigfoot after making some "whoop" calls while fishing.

This episode includes the "Dogman" footage along with still captures of the first Bigfoot I captured on video and the "Sneering" Bigfoot.