What Really Happen When Justin Smeja Pulled The Trigger? 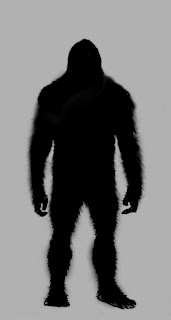 What really happen on that day Justin Smeja claims he shot two Bigfoot? I have read every account I can get my hands on and watched the recent hour-long interview. This whole affair makes me nauseous. I had to stop several times during the video interview and just calm down. I was so angry and disgusted by what I was hearing. It is gut wrenching, sickening, and every other adjective you can think of to describe it. I listened to learn the “truth” about what really happen. Unfortunately I have even more questions now than before the interview.


Things just do not add up, as my grandpa used to say, “that dog don’t hunt”. After all the interviews and statements here is what we think we know:

This is all we really know. I personally find Justin Smeja hard to believe. In my opinion so many of his “facts” just do not “add up”.

Below are some of my main concerns:

Smeja claims he shot the Bigfoot with a 25-06 rifle while bear and or deer hunting. The 25-06 is a poor choice for bear. It is a matter of opinion and Smeja claims to have killed “hundreds of deer, pigs, and bear” with this rifle and he may have but it would not be my first choice. If you asked any experienced bear hunter the 25-06 will not be at the top of the list. I question if the round even exited the body of the Bigfoot. Much depends on the ammunition he was using but on average a 100 to 120 grain round will have a muzzle velocity of 3000 FPS. The energy the bullet had when it hit the Bigfoot would have been approximately 2000 ft-lbs.

More traditional bear cartridges like the 300 Winchester. Mag (180 Grains) would pack 3400 ft-lbs at that distance. The 30-06 Springfield (150 Grains) round would pack 2500 ft-lbs of energy. I am not saying you cannot kill a bear with the 25-06, but there are better choices that will hit harder and penetrate better. So I am back to my original question, was the 25-06 round capable of doing enough damage to kill the Bigfoot with one shot?

The basic ballistics of the 25-06 round 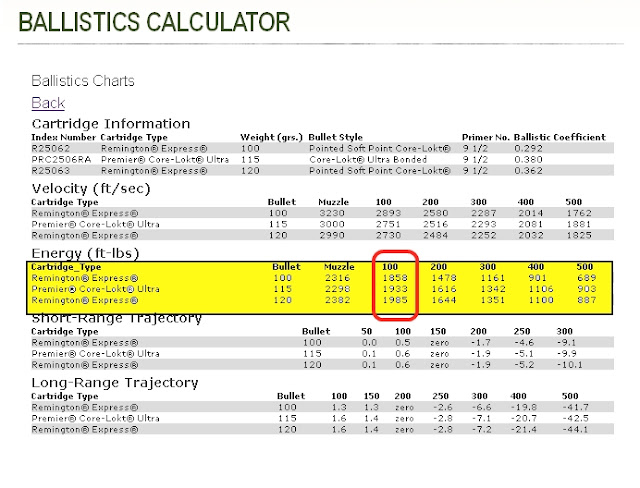 Smeja also claims that the 25-06 round because of its velocity makes a small entrance wound and a “basketball size hole” exit wound. Then claims a 30-06 makes a uniform hole through the animal. I have killed many deer using a 30-06 and all I have to say to that is he is full of crap in my opinion. So much depends on the size of the animal and the type of round. I have seen a 120 lb deer, shot through the heart run over 100 yards before succumbing to the wound. 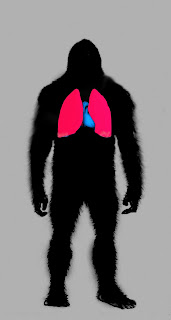 Smeja claims to have shot the adult Bigfoot under the right armpit as the Bigfoot was turning away. We do no know the anatomy of a Bigfoot, but making the assumption it would be similar to a human as far as lung and heart location the round missed the Bigfoot’s heart completely. Depending on the accuracy of his shot it may have hit the upper portion of the lung. If it missed the lung then it went into the upper shoulder or shoulder blade area. I do not know how thick a Bigfoot is or how tough the hide is, but based on reports we know they are massive. Adults are reported to have a large “barrel chest” and “wide thick shoulders”. They also must have a large bone structure supporting this massive hulk. I have also read accounts of adult Bigfoot being shot in the chest and stomach with large caliber rifles and calmly walking off. In his interview he pulled the trigger as the Bigfoot was turning away. The impact of the round in that area could have shocked the Bigfoot and knocked it down as he claims. This is one of the few things about the shooting that may be accurate is the reaction of the Bigfoot after the first round hit it.

In David Paulides’ book the “Hoopa Project”, there is a report about a young boy deer hunting when he is startled by a Bigfoot standing up near him. The boy being scared, and startled shoots the Bigfoot center chest with a 30/30 at point blank range. The Bigfoot calmly turns and walks off. When the boy returns home he tells his mother what he did. They go to the authorities because she thinks her son could have shot a person. They go to the location of the shooting and there is no blood and no body is found.

Though not impossible I have a hard time believing this round killed the Bigfoot if he hit it where he claims. It may have eventually died from the wound, but it would have been able to run away a great distance before succumbing to the wound. If the lungs were not hit and the wound was treated the Bigfoot may have even survived. I think they are very intelligent and have knowledge of the woods and remedies much like the Native Americans. So making the assumption that the Bigfoot died based on Smeja claiming he heard it fall like a “car crash” is a stretch for me based on the story he told during the interview.

If the Bigfoot was in that area the infants would have found it immediately. He claims they were looking for the adult then coming back together and talking. The only reason I can think they would be staying around is the adult was wounded nearby and they were protecting it or trying to distract Smeja from it.

In my opinion, if Smeja did bring down the adult Bigfoot he would have to shoot it multiple times with the 25-06 caliber or go for a head shot.


I have gone over all these possible shooting scenarios to demonstrate how hard it is for me to believe his story.  I think there is some truth mixed with false statements. When you try to logically look at the scenario it just does not make sense to me. Someone is not telling the truth, something is missing.

This is the most disgusting part of the whole story if it is even true, but Smeja claims he shot the infant then hid it under some brush. I have a hard time believing he would leave the infant behind. In my opinion he knew what he had and he knew the value of it. The infant would be easy to transport, hide, and store in a standard freezer. In my opinion he was even hinting during the interview that he had the infant.

The infants sticking around and not running off is another part of the story I find hard to swallow. The only reason I can think that they would stay in the area is that the adult Bigfoot was wounded or dead nearby. If the adult Bigfoot managed to run off as Smeja claims the infants would have followed. Remember they claimed they looked around but never found the body after it made a "car wreck" type crashing noise after being hit with one shot from Smeja's 25-06, under the arm pit as it was turning away from him. So in their scenerio for some unknown reason the infants stuck around after the adult ran off. That does not make any sense to me!

This does not pass the “smell test” at all.

No video or photographs:

I do not believe Smeja when he says he does not have pictures or video of the infant. He is a trophy hunter and to believe he would not have a camera or a camera phone with him in case he shot a bear is laughable. I just do not buy it. How he can go from committing the caulis and hideous act of shooting both these Bigfoot in cold blood, then having a sudden change in heart and not taking pictures of his kill? He claims to him at the time it was a "monster" and "something that did not belong". One would think he would at least take pictures to prove these "monsters" exist and he shot one or two of them. This makes no logical sense to me.

In my opinion based on what little we actually know and following my gut, I think Smeja shot the adult multiple times and killed it. The infants stayed with the dead parent and Smeja took this opportunity to shoot the infant. He then took the infant home and has it in a freezer somewhere. He took flesh from the dead adult Bigfoot but left the body because of its size. He sent Dr. Ketchum two flesh samples, one from the adult and one from the infant. He is now waiting for the DNA Paper to be published so he can capitalized on the publicity and make the most money possible by producing the infants body and the photographs/video.

My version of events may be completely wrong, but it makes as much sense as the nonsense Smeja has been dishing out.

Post By: Scott Carpenter
Posted by Joe Black at 2:26 PM