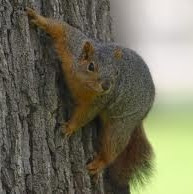 Over the weekend (June 3rd, 2012) I walked a major trail in the Great Smoky Mountains National Park. I have walked this trail many times and the area has been the focus of my research efforts over the past two years. This particular section the trail winds up the side of a mountain until it reaches the top. Once on top the trail continues on for several miles following the top of the mountain range.

I was on my decent when I began hearing a squirrel “barking” to my right in the direction of the top of the ridge line. A squirrel will bark at any person or predator (Bear, Fox, Wolf) that enters its area to worn of danger. I have even witnessed squirrels barking at deer on one occasion. It is safe to say any intruder into their territory on two legs or four will get a loud “tongue lashing”.

The odd part about this was the distance off the trail and the location of the squirrel. The squirrel doing the barking could not see me, so what ever had the squirrel upset was above me on top of the ridge. When I rounded a sharp curve in the trail another squirrel above me joined the first, then about fifty yards down the trail a third squirrel joined in. It appeared that something was following me along the ridge line.

The below drawing shows the trail, ridge line, and location of the barking squirrels. 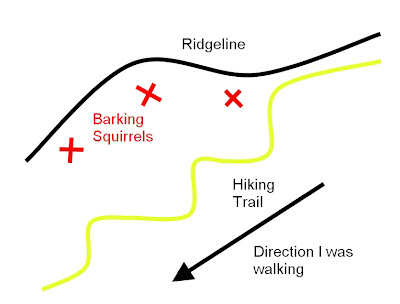 I have no doubt I was being followed as I was leaving. The squirrels were definitely giving away my “shadows” location as I made my way down the mountain.

This is not the first time I have experienced this phenomenon on this trail. Over the past two years I have been followed in or out of this area with the squirrels barking in succession as I go. Each time I am not near the location of the squirrels and my “shadow” follows the ridge line or comes up the mountain below me. I would estimate this has happen at least six times on this trail alone. I have also experienced this at other research locations in a similar pattern.

The question becomes what is following me? Being a Bigfoot researcher I am leaning toward the obvious with good reason. One could argue that a bear or even a spooked deer was going parallel to my course. In a famous line from the movie “Mission Impossible” let me quote, “once is accident, twice is coincidence, three times is enemy activity”. I think in this case I definitely have Bigfoot activity.

Last fall I even put this theory to the test. I was going up this same trail when the squirrel parade started below me to my right. I begin running and made my way to a gap between two mountains tops. Once there I sat down and just listened. I could hear the squirrels in successive order begin barking as the Bigfoot tried to catch up with me. On this occasion five different squirrels barked as my escort attempted to catch up. I must imagine it was quite aggravated that these little varmints were giving away its location as it came up the mountain.

The below drawing shows the trail, the mountaintop I went around, and the path the Bigfoot took. 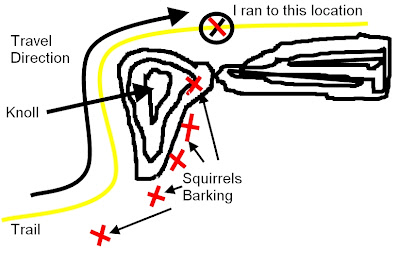 The Bigfoot may be able to hide from humans and disappear into thin air, but they cannot hide from the prying eyes of the squirrel. Next time you are in your research area tune into what the wildlife around you is doing. They can be your eyes and ears. The Bigfoot take advantage of them to locate you, it is time we turn the tables.

I have yet to come up with a way to use this situation to get video of a Bigfoot, but in the future I hope to do so using my furry little scouts to assist me. Now that I think I know what is causing the uproar I need to be prepared to take advantage of it in the future. I would need a brave soul willing to drop in behind the path of the Bigfoot to push him while I go ahead to an ambush location. The issue arises is this a safety when doing something this aggressive. A viable alternative would be to put a “Plot Watcher” type camera along the likely route of the Bigfoot, wait a week, then go into the area and attempt to illicit the Bigfoot to follow you. This is the strategy that I will be trying in the near future.

So next time you are out, listen for the squirrels, they may be trying to tell you something!