I spent two days in the National Park over the weekend. On Saturday after investigating the "stone ruins" I encountered a black bear. It was a young male around 150-200 lbs. It was an odd encounter because no matter how hard I tried I could not scare him off. This was the first time I have encountered a bear in the wild and it did not immediately run off when it recognized what I was. This time I yelled, waved my arms, and beat on the side of a tree. Instead of running off the bear just sat down about fifty yards away and just looked at me. At this point I readied the Bear Mace that I carried. After a couple minutes the bear went back to digging around in the ground and I took this opportunity to slowly back out. I did not trust this bear. 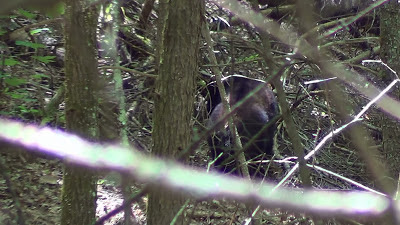 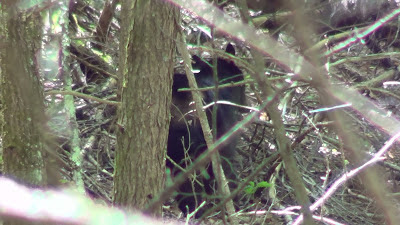 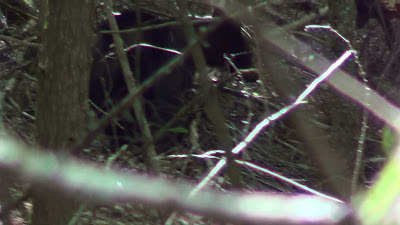 Now the the Bigfoot stuff. The past couple weeks the "odd" stuff has been increasing. I have blogged on this before and it is happening again. What am I referring to? Well for example, when I returned to the feeding station in the National Park where I left two apples two weeks ago, I find the apples gone and two sticks approximately 10 inches long laying where the apples were. The sticks were the circumference of my finger and laying parallel to each other. Please note that since I left the apples there has been at least two cold fronts pass through dumping several inches of rain and producing high winds. These sticks were light enough to be blown off the downed tree trunk they were laying on. I find it hard to accept that this was random and by chance, but as usual I can not prove anything.

I also heard voices of people talking in the middle of the wilderness. This happens from time to time, but this weekend its more overt. I was in a isolated valley, more than a mile from any trail with high ridges on every side when I heard what sounded like a group of people talking in a foreign language. It was not "chatter" but a distinct conversation. This "conversation" went on for about twenty minutes as I sat quietly and ate my lunch. The video camera's microphone did not pick up anything.

Later in the same area, I was near a stream that went through heavy foliage. I heard what sounded like someone or something walking in the water. It was so unmistakable that I took out my bear mace in case a bear or wild hog was coming in my direction. I also heard some more talking or this time I should say mumbling. I backed off the stream a little and waited to see what would emerge. Ten minutes later I am still waiting but the sounds are gone and I am left scratching my head. Once again no sounds are picked up by the video camera.

The final thing bugs me the most. Several times I thought I saw something large and dark ducking behind a tree out of the corner of my eye. During my survey of the "stone ruins" area I know I saw something black and large move between the trees approximately 300 feet away. I was digging around in a rock pile and when I looked up I saw it. This would occur two more times.

The critic and the novice would say I am just paranoid, taking explainable events and letting my imagination run wild. The experienced Bigfoot researcher would say business as usual.