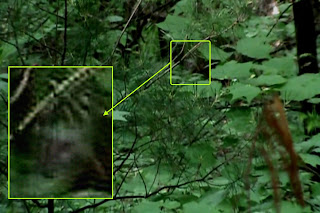 The casual Bigfoot follower and the general public have been spoiled by the Patterson Bigfoot Film footage. They think that those unique circumstance should be re-creatable and modern Bigfoot researchers should be able to go into he woods, have a Bigfoot step out on a clear sunny day and slowly walk by us while we film it with our HD digital cameras. Unfortunately this is not the case. The Bigfoot lives in the forest and the wild areas. He is at home there. Just like the Whitetail Deer, he also knows how to hide and watch.The average person has no experience in the wild and has never hunted. The concept of trying to find a wild animal hiding is foreign to them. When shown a picture of a deer or other animal hiding 99% of the general public can not even find it even after it is pointed out to them. How can they then be expected to see a Bigfoot hiding in thick cover?

The Bigfoot's body is covered in a  natural Gillie suit comprised of his hair covered body and black to pale grey skin tone. When it hides it is only going to expose it's face and then only one eye. This is most logical way to observe while trying to stay hidden. I get complaints all the time, "why do we only see their heads? Where is the body? It's just Pareidolia, you mind is making a face out of leafs and shadows!"

This is typical and unfortunately these people are ignorant of how wild animals and the Bigfoot in general stay concealed. The reason you only see the head of the Bigfoot in many of my videos is simply that is where its EYES are located. The sensory organs are on the head eyes, mouth, nose, and ears. I suspect if we had eyes on our elbows then the only videos I would be showing you would be of the Bigfoot's elbows. The hiding of the body and only exposing the head, usually peeking with one eye only is a survival instinct and very smart. All wildlife use this tactic because it is instinctual. The Whitetail deer is but one example of a animal that is an expert at this tactic.

This leads me to the subject of this blog article. People have no problem accepting a photograph of a deer in thick cover where only part of the animal is visible. You show this picture to a person, point out the half face of a deer and they will respond "oh yea, now I see it". But, if you show them a picture of a Bigfoot in that exact same circumstance the will say "oh that's your mind playing tricks on you, its just shadows and leafs, everyone knows Bigfoot does not exist."  Interesting how they have no problem seeing the "known" animal yet the Bigfoot is always "Pareidolia".

Below is a prime example, don't cheat, only look at the first photograph and see if you can find the deer hiding. 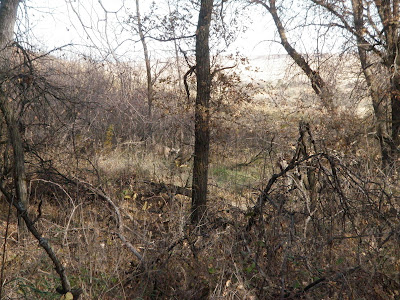 Now here is the deer pointed out. 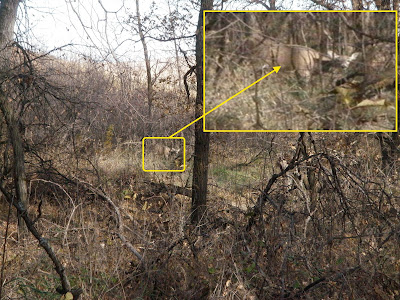 If that was a Bigfoot hidden that well I dare say most if not all would claim oh this is just lights and shadows. The below picture, that I think is a Bigfoot, is a prime example of this. 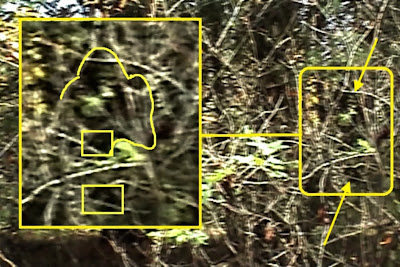 The hiding of the face and only peeking out with one eye or side of the face is also a common occurrence. Below is an example of a deer using this tactic. 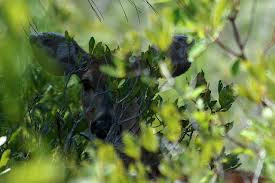 When a Bigfoot does the same thing again it is dismissed as Pareidolia. The below photograph is a prime example of a Bigfoot hiding and only peeking with one eye.

It is to be expected that since people do not accept the existence of Bigfoot then anything that is not HD, full bodied, and close up has to be anything but a Bigfoot. If Bigfoot was widely accepted and people had seen them on nature shows and in school books then there would be no argument about most of the photographs and videos I have captured. Once you pointed it out people would say just like they do with the deer now "oh yea, there is the Bigfoot, I see it now". Below are a few side by side examples of a deer and a Bigfoot hiding in their natural environment.The deer is on the left of each photo and the Bigfoot on the right.

If you are expecting another Patterson type film of a Bigfoot you may be in for a long wait. Unless someone comes forward that has footage from a long term habitation site,  like most elusive wildlife,  the above pictures are going to be the best a Bigfoot Researching can do. It would take major funding to get better footage and since Bigfoot is a taboo subject even with the DNA Study out, I do not see this type of effort happening in the next few years.

So train your eye, spend time out doors hiking  and observing wildlife. Learn how they hide and how they evade you. This will pay great dividends when trying to locate a Bigfoot in heavy cover, because that is where he lives, that is his "Natural Environment".