The Bigfoot "Matilda" - The Full Story 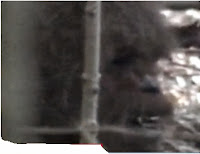 Though blogger Robert Lindsay has been a harsh critic of Dr. Ketchum and aspects of the DNA Study, he has posted a very interesting article in support of the fact that the Bigfoot Matilda is NOT a person in a mask. It appears Lindsay has some inside information that if true sheds some new light on the full story behind the filming of video. While the critics howl its a "Chewbacca Mask" Lindsay makes some very good points and essentially agrees with my blog post Matilda - Not All Bigfoot Look Alike.

I do not need Robert Lindsay's support and agreement to know that the footage is authentic. I am involved in the DNA study and know the people involved and the documented methods used to collect DNA from Matilda. I also have spoken to those who have seen the video and have seen Matilda with their own eyes. The complete HD version of  this footage is "amazing" is the comment everyone repeats. However, I think it is very telling when a known critic of  many things Dr. Ketchum has done is intellectually honest and states his opinion and that opinion supports the DNA Study.

Below is the excerpt from Robert Lindsay's Blog about Matilda: 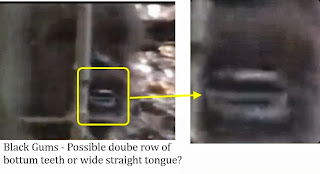 Why I do not believe that Matilda is a mask. The black tongue, gums and inner mouth, the long straight tongue and the jutting lower jaw with a strong underbite all suggest to me that this is not a mask. I em bothered by the fact that her mouth is open the whole time as a mask would be. But she may be opening her mouth to smell better, as many animals open their mouths to smell. She probably smells the human hidden nearby in the ghillie suit. In the rest of the video, Matilda walks forward a few more steps, sees the woman in the ghillie suit, growls and turns and walks away. When she walks away, she walks exactly like Patty, 100% dead ringer. 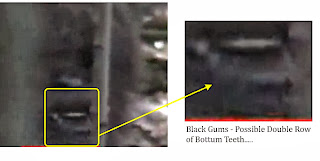 Back story: This was a known habituation site that the BFRO had been investigating. Dennis Pfohl worked with the BFRO and was investigating the site. The couple had a number of videos of Bigfoots. They used to show them at parties at their house to the locals. It was well known in town that Bob and Sissy had Bigfoots on their property, but was sort of an open secret. Later, Erickson got involved and hired Pfohl. The couple offered two of the videos for sale. Both videos looked like the Matilda footage – that is, they looked like Wookies. Erickson rejected them as possible fakes with a Wookie mask.

The woman was instructed to try to get better video. For a long time, the woman tried to get close up video, but she could not get close enough to the creatures to videotape one. Finally, Dennis showed her how to use a ghillie suit and loaned her a nice video camera. Using the ghillie suit, she was finally able to obtain good footage such as the Sleeping Bigfoot and Matilda footage.

If this couple were hoaxing, why wait until you get the ghillie suit? Why the long interval between the initial Wookie videos and the later ones shot with the ghillie when the woman said she could not get close enough? It’s not a problem to get close to a guy in a suit. If they were hoaxing, they could have delivered Wookie videos at any time. After 4-5 more videos were taken, Erickson apparently decided that maybe Matilda did look like a Wookie after all, and he bought the footage.


What we need to know is what Dennis and Leila Hadj-Chikh saw when they were at the site. Did they get a good look at Matilda? If so, did she look like a Wookie? If she did, then that solves the “she looks too much like a Wookie” problem. The reason she looks too much like a Wookie is because that is actually how she looks. I also believe that Matilda is the Bigfoot that Dr. John Bindernagel saw when he was flown out to the site by Adrian Erickson. If so, Bindernagel may also have noticed that she looked like a Wookie.
It is true that the couple sold the videos to Adrian for a pretty penny, possibly ~$100,000. This is where the hoaxing accusations come in – they profited immensely from those videos. They used that money to buy a boat and a new car and they moved to a better house a few miles away. Some have described the couple as “somewhat shady.” The habituation site was located on Mann Road in Crittenden, Kentucky.

How easy would it be to modify a Chewbacca mask to make it look like Matilda? It has been said that it would be trivial to modify the Chewie mask shown to make it look like Matilda. However, that would mean a custom mask. Custom Bigfoot masks costs tens of thousands of dollars, far beyond the means of most folks, and are available on from a few special effects artists. Furthermore, no Bigfoot hoax has ever used a custom mask. Most Bigfoot hoaxes use only a few masks, which are generally easily identifiable.

Keep in mind also that when George Lucas created his Chewbacca character for Star Wars, he modeled it on what he thought a Bigfoot looked like. So it should not be surprising if some Bigfoots look like Wookies.
But would it really be trivial to do this on your own?