It is the last weekend in September 2010 and I have decided to take a weekend off from Bigfoot research and go Bow Hunting. I decided to go hunting at the public land research area where I had killed deer in previous seasons.  I was not concerned about Bigfoot interference since the location I would be hunting was over a mile away from the general area where the Bigfoot and I have interacted.

I arrived a little late and the sun was already starting to rise. I put my tree stand on my back, grabbed my bow, put my video camera in a cargo pocket just in case, and started down the dirt road that lead to the area I would be hunting that day. The road goes down the middle of a underground gas pipeline. The sides of the road are kept free of any underbrush or trees. The grass had grown up on both sides of the road bed and was at least five feet high. The width of the pipeline right away was approximately 150 feet with the road in the middle then woods on either side.

I had traveled in about one quarter of a mile and had started down a hill when I began to get the feeling I was being watched. The hair on the back of my neck stood up and I just knew a Bigfoot was nearby. This is when everything became strange and time seemed to slow down. I stopped walking and just stood still for a moment. Something in my head was telling me “turn around, turn around”. So I slowly turned around and looked back up the hill.

On the right side of the dirt road I noticed a black round object about the size of a human head start slowly rising up out of the tall grass. My heart started to pound so loud in my chest I could hear it in my ears! I realized it was the top of “something’s head” and it was approximately fifty feet away from me.  The head continued to rise until I could see the eyes, cheeks, nose and the top lip. It was a Bigfoot! I made immediate eye contact with the Bigfoot and we just stared at each other. I noticed it would scrunch its nose from time to time as flies or mosquitoes buzzed around its face but it maintained eye contact with me and made no other movement.

I do not know how long we stared at each other and it made no facial expressions other than the scrunching of its nose. It then tilted its head slight to its right and I started to speak to it but before I could get the words out it bolted from a crouched position across the road in front of me, moving from my right to left into the woods. It made no sound and I have never seen anything living move that fast before in my life. The speed was amazing. The encounter seemed to last for minutes, but it only lasted a few seconds.

It took me several minutes to process what had just happen. I went to the place where the Bigfoot was crouched and could find no sign of its presence. No footprints, no broken foliage, nothing. It had disappeared into the woods on an old horse trail. The ground was dry and hard packed. This was my first “eye contact” encounter with a Bigfoot as an adult. I had an encounter with two juvenile Bigfoot as a child, but this was a completely new experience.

The Physical Description:
The Face
The skin was black. The nose was wide and flat. The top lip appeared to thin from what I could see of it. The eyes were black or dark drown. I could see some sclera (white) around the edges but very little. The head was round. There was no hair on the face that I could see. The cheek bones were high and pronounced. The eyes were deep set and the brow pronounced. The brow looked funny because it went straight across the top of the eyes and I did not notice a break between the eyes going down to the bridge of the nose. It looked like it had a fresh “bowl haircut” with choppy bangs. I noticed its right ear appeared to stick straight out from its head and was small for its head.

The Body
The body was covered in black hair. It moved so fast I could not tell how long the hair was or how thick/thin the coverage was on the body. I remember looking at its legs and how muscular they were and I did see the bottom of one foot as the sun reflected off of it. The bottom of the foot was light gray or tan but that could have been from the dirt on the bottom of the foot. The Bigfoot was not an adult. It appeared to me to be a sub-adult, a teenager possibly. It was running in a crouched or bent over posture so I can only estimate that he would stand a little over six feet tall. I would estimate its weight between two hundred and two hundred fifty pounds. It reminded me of a skinny teenager. It was not thick in the chest yet and the arms long and slender. I only saw it from the side so I could not tell how wide the shoulders were. Its head did sit on top of the shoulders giving it the classic “no neck” look of a Bigfoot.

Below is the sketch of the Bigfoot I named "Scout". 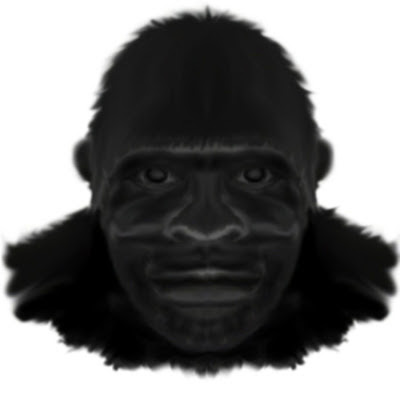 I named this Bigfoot “Scout” because I think it was the one assigned to watch the area and follow me around. I captured it on video around the feeding station the previous year as it peeked at me from behind. The general appearance matched what I had captured on video. I have captured glimpses of this Bigfoot from time to time but it has not shown itself to me again. 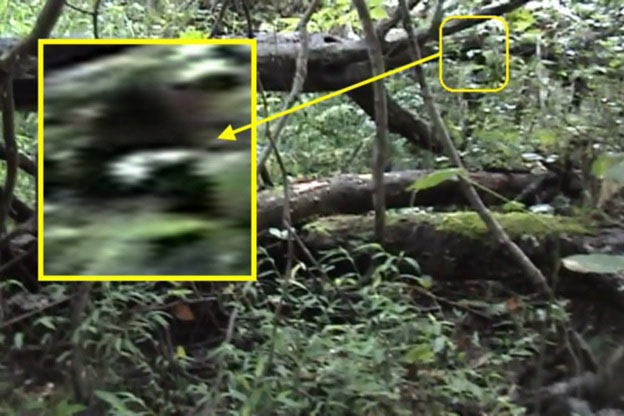 Below on the left is a still capture of the Bigfoot watching me from behind and the still capture on the right is the exact same location ten minutes later. 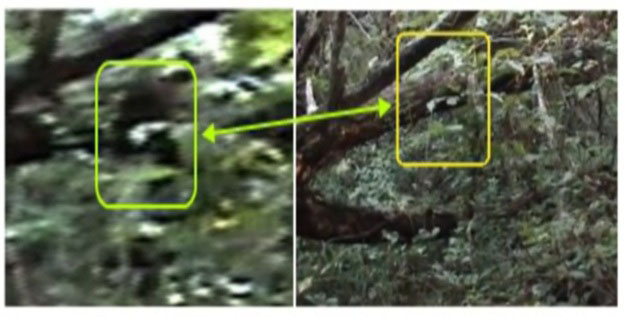