When I first started doing “Bigfoot Research” I thought that a Bigfoot was some sort of cross between a man and an ape. A missing link you might say. It did not take me long to realize that the Bigfoot was no ape or missing link. He looked human in the face and exhibited an intelligence equal to and at times more advanced than our own.

I also learned that there was more going on in the woods than just a large hairy man running around scaring the tourist. When Bigfoot researchers talk amongst ourselves we often share some on the “odd stuff” we have witness or experienced. These are things we would never discuss publicly and only share with those we trust. People already think you’re a “kook” for researching Bigfoot so there is no way any of the “odd stuff” would be talked about.

Well I am going to break with the conventional wisdom and share with you some of the things researchers do not talk about. Some you may be aware of some you may not. I only know that if you research Bigfoot long enough you are going to run into or experience these things.

Orbs – Bright round balls of light that float through the forest. They can be almost any color and range in size from a baseball to larger than a beach ball. They have been reported to hover around Bigfoot and appear just after or before a Bigfoot sighting. They can also appear alone and not associated with Bigfoot research. I have never experienced this and if I did I would exit the area immediately. The orbs have been known to do nasty things to people and animals. In the book “Hunt for the Skin Walker” an orb was seen killing a dog by “melting it”!


Zapping (Infrasound) – This is a not so pleasant feeling of dread and “impending doom” that many people get when they are around a Bigfoot. It can be a mild or it can be server. I have experienced it many times. On three occasions I was zapped so severely that I lost my memory of events. If not for my video record I would have not known I had been zapped. I can attest that is does not feel good. Many people are very sensitive to this and I am one of those people. I have experienced headaches, eyes watering, nausea, and confusion, all symptoms of being zapped and also symptoms of exposure to infrasound. May researchers including me think that is what the Bigfoot use to “zap” you.

Mumblings – This is when you are in the deep forest and no other people are around. You will hear what sounds like people talking close by but you cannot make out what they are saying. Almost 99% of the time your video recorder will not pick this up, it’s just too low which is extremely frustrating. I have heard this several times.

Mimicking – Many researchers and witnesses report hearing a baby crying in the woods where there should be none. Other times it’s a person talking or child yelling for help in a remote dark area. Animal sounds that are not quite right or out of place for the time of day or time of year. (Owl hoots in the middle of the day, migratory song bird calls in the middle of winter). In one witness report a woman actually heard her own voice coming from the woods calling the chickens in to feed!

Quick Glances/Shadows  – I hate when this happens to me! The researcher will see something out of the corner of his/her eye, a dark that ducks out of sight. You will feel like you are being watched, turn around and for a moment you see something but it disappears immediately. You will see a figure in thick cover, you have no doubt someone is there. You look away for a moment to move closer and when you look back it is gone.

Stick Snapping/Bipedal Foot falls – I get this treatment on a regular basis. You will hear the crisp snap of a stick, just one. You will turn and look in that direction. A few seconds later directly behind you another stick will snap. So you turn and look that way, and so on. This ploy is used so that they can take turns looking at you. Sometimes this last only last for one or two snaps and other times it has gone on for over ten minutes. On one occasion I just ignored it and went about my business and a large softball sized rock was thrown at me. So I learned to play along.

Bipedal footsteps are also common. You will be walking along and hear footsteps near you but out of sight. When you stop they stop, when you continue they continue. It’s not an echo and it is usually out of cadence with your stride. I once had this happen and I sped up then abruptly stopped. The Bigfoot goofed and took two extra steps! It was before day light and I just turned in the direction of the extra steps and with great pride yelled “gotcha”.

Heavy Breathing/Snort – A heavy breathing is heard nearby but the direction it is coming from is hard to discern. Also a snort will be heard, sometimes in response to the researcher and other times out of the blue.

Mock Charge – The Bigfoot will sound like an elephant coming through the woods at you. Limbs breaking, crashing trees, heavy foot falls, and then right before it breaks out into the open eerie silence. Most the time it’s so quiet you can hear your heart beating in your own ears. When you go to check you find evidence of broken limbs and vegetation but no tracks, no hair, no smell, it just vanished a few feet from you!

Rock/Object throwing – This is a common one but I thought I would mention it because it can happen in very odd places and times. Many times you will look into the woods and wonder where this came from because it is so open. It is mind boggling how you could miss seeing the creature that threw the rock.

Stick, Rocks, Other things left in the trail – This one makes you think you’re losing your mind. You will walk down a trail and there is nothing lying in or beside the trail. Come back through thirty minutes later and there is an X made of sticks in the middle of the trail. Sometimes a rock stack, a feather that does not belong. I once found white hair on a trail. I knew it was horse hair but no horses went by either way and it was evenly spaced out on the trail in four different locations! I also was given wild mint on top of a balanced rock stack.

Day Time Eye Shine – In the shadows you will see to evenly spaced bright white circles that appear to be reflecting sunlight but there is no sun hitting the area. At first you think it’s an optical illusion until the eyes blink simultaneously or rock back in forth. 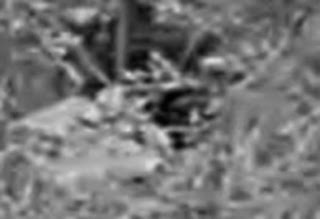 Strange Creatures other than Bigfoot – This one I have experience with. I had several encounters with a creature none as the Dogman. I have heard other researchers report seeing strange things as well. Here is a list of the ones I am aware of:

Lizard Man – large bi-pedal creature with a snake like head, claws, and scales.
Goat Man – Has a Bigfoot like body but the head looks like dog with horns.
Dog Bear – A creature that has the body of a bear but the head of a dog/wolf.
Little People – Small fully developed people between 2 and 4 feet tall.
Dwarf Bigfoot – Small hair covered creatures that look like a fully developed Bigfoot but small 2 to 4 feet tall.

Sub-Human/Feral Humans – Many researches have stumbled across feral humans. They can be mistaken for a juvenile Bigfoot. I hear these encounters can be scary because they look odd, sometimes with excessive body hair, canines, almost Neanderthal looking.

There are more, these are the ones I have been told about by other researchers.