Fact: Justin Smeja submitted a piece of flesh he claimed was recovered from the area where he shot an adult and an infant Bigfoot to the Ketchum DNA Study. (Sample 26)

Fact: Cutino/Smeja submitted flesh sample(s) they claim came from the same piece of recovered flesh that was sent to the Ketchum DNA Study to Trent University Lab and DNA Solutions Lab for DNA testing.

Fact: The Ketchum DNA Study reports that Sample 26 is from a Bigfoot and a full genome was extracted.

Fact: Cutino/Smeja used these reports to launch an attack on the Ketchum DNA Study and claim that Dr. Ketchum was" hoaxing" or "making up results" since it is their assertion that all the flesh came from the same larger piece of flesh.

Fact: I wrote blogs defending the Ketchum DNA Study and provided documentation from the study and other sources to back up my position. I make the assertion in my blogs that the flesh submitted to the Ketchum DNA Project was different from the Bear/Human contaminated samples submitted by Cutino/Smeja to the Trent and DNA Solutions laboratories. I also stated my opinion on why they may have done this.

Fact: Bart Cutino accused me of "lying" and "misleading" my readers in large part because I challenged his claim that the sample submitted to the Ketchum DNA Project (Sample 26) was from the same larger flesh sample(s) later tested by labs he had contracted with. I  maintained the samples are completely different. Sample 26 is from a Bigfoot and the Cutino/Smeja Samples are from a Bear with human contamination.

Fact: DNA Solutions reports the Haplotype of the sample they tested for Cutino/Smeja is T2.

Fact: Trent University reports the Haplotype of the sample they tested for Cutino/Smeja is A.

Fact: It is IMPOSSIBLE for the flesh samples to be from the same subject!

Fact: The sample submitted by Justin Smeja to the Ketchum DNA Project IS NOT from the same piece(s) of flesh submitted to Trent or DNA Solutions labratories.

Fact: The Haplotype results from the Ketchum DNA Study for Sample 26 came from an independent university lab - University of Texas, Southwestern in Dallas, TX..

Fact: The DNA tested from Sample 26 was uncontaminated and from a single source.  (See Attachment 1 at the bottom of this blog for details)

Fact: Bart Cutino claims Trent University made a mistake in reporting the Haplotype of the sample as A.

Here is his quote "With respect to the discrepancies in hablotypes from our labs, we believe it’s pretty clear (though double-checking) that the type A mention is an error, because if you read the report they never mention “A” (which is Native American) they only discuss a “European” hablotype. Justin must be T2 because Oklahoma got both mtDNA & nDNA from him from their testing on both the salted and frozen pieces."

Interesting, since he has claimed the Ketchum DNA Project is flawed and full of errors then tries to admit his lab made a mistake and use that as an excuse for the discrepancies in the Haplotypes? Sorry Bart that dog wont hunt. You can't have your cake and eat it too.

Fact: SOMEONE IS MISLEADING PEOPLE AND IT IS NOT ME!


Below are the actual excerpts from the Cutino/Smeja Lab Reports and the Ketchum DNA Study demonstrating that the Haplotypes DO NOT MATCH. 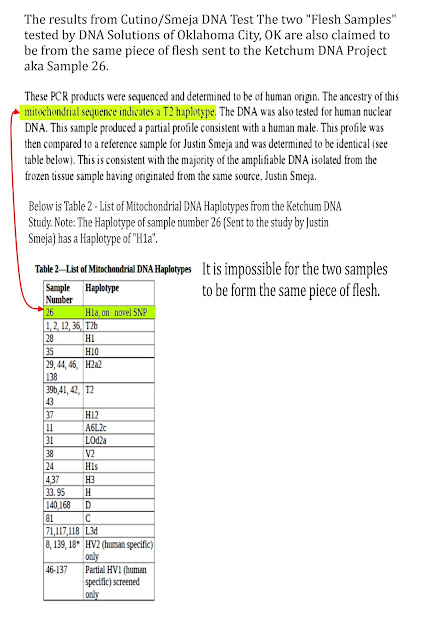 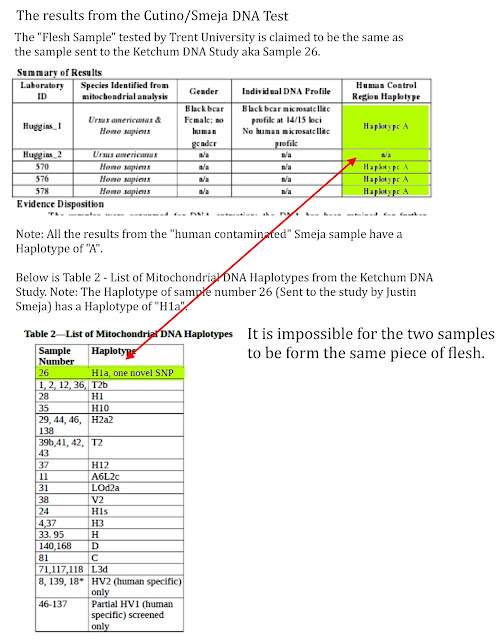 Below are the flesh samples side by side, I will let  you be the judge. 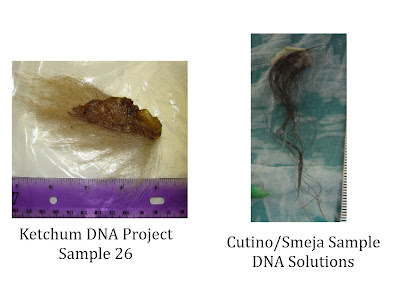 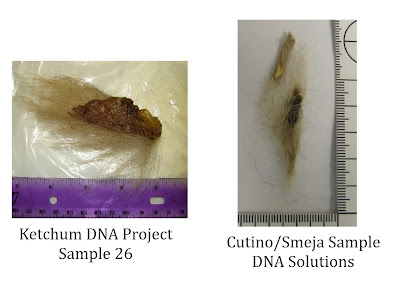 In the end what the flesh looks like does not matter. It is the DNA testing and the Haplotypes that prove that the samples are not related and not from the same subject.

Bottom line Bart Cutino befriended a man that openly admitted to shooting, in cold blood, a Bigfoot adult and then shooting a defenseless infant Bigfoot. In my opinion this calls into question Bart's judgement and integrity.

For what ever reason, Cutino, Smeja, et al have attacked and attempted to mislead the public by testing Bear flesh and claiming it was from the same piece of flesh that was in the DNA study.
Even the DNA studies Cutino commissioned prove that he his hoaxing but he relies on the ignorance of the general public concerning DNA testing to get away with it.

I am not backing down and I am not going to let the critics bandy about their accusations, insults, claims, and personal slurs without a challenge. A challenge that is based on documented FACTS!

The run summary generated by the HiSeq 2000 next generation sequencer provides scores, Q30, for run quality​78​. Q30 can also be used to determine if there was any contamination (or mixture) found in the samples sequenced.  According to Illumina, a pure, single source sample would have an Q30 score of 80 or greater with an average of 85. However, if there was contamination present in the sample sequenced, the divergent sequences would compete against one another prior to sequencing causing a contaminated sample to have a Q30 score of 40 to 50.   The Q30 scores for the three genomes sequenced had Q30 scores of 88.6, 88.4 and 88.7 respectively for samples 26, 31 and 140.  The Q30 is the percent of the reads that have the statistical probability greater than 1:1000 of being correctly sequenced. Therefore, not only were the sequences from a single source, but the quality of the sequences were far above the average genome sequenced using the Illumina next generation sequencing platform. The high quality of the genomes can be attributed to the stringent extraction procedures utilized whereby the DNA was repeatedly purified.   This ultra-purified DNA also allowed for greater than 30X coverage of the three genomes.  The summary and of the next generation sequencing generated by the HiSeq 2000 Illumina sequencer is furnished as Supplementary Data 7-10.