Bigfoot or BlobSquatch? The Blurity Software Helps Clear Up The Question

When I posted the video "Back Yard Bigfoot" I received some of the harshest criticism in my three years of research. I was called delusional, mentally disturbed, and out of touch with reality. People just could not accept I was being visited at my residence and they also could not accept that what I had captured on the night vision scope could actually be a Bigfoot.


I find it interesting that most people do not read the background information about a video. If they do read it, it is apparent they either ignore it or refuse to believe it. I stand behind the video an still maintain it is a Bigfoot. The most compelling "evidence" to me is that my neighbor looked out her kitchen window at approximately the same time I was filming and saw a "tall dark figure standing in the bushes against the deck". The next day while I was doing follow-up she saw me and she approached me asking what I was doing. I told her I thought I had seen someone hiding here last night and told her what time. She looked at me with an odd look then responded that she went to the sink to put up dirty dishes about that time before going to bed and looked out her window and she saw what looked like this "tall dark figure".

Before she interrupted me I took this picture of the disturbed ground and the misplaced leafs in the exact area where I captured the video of the Bigfoot.

I purchased some software called "Blurity". This software was designed to clear up blurry or fuzzy photographs. So far the software has exceeded my expexpectations. Critics suggested this software would expose hoaxers and show "blobsquatches" to be nothing more than leafs and shadows. So I took the challange and purchased the software. Every photograph I have processed using this software has actually been improved showing more detail. Eyes, noses, skin tone, ears, and mouths have become clearer and more visible. Not once have I discovered what I claimed as being a Bigfoot has turned out to be a clump of vegetation.

When I used the software on still captures from the night vision footage the results were extremely interesting. In the below cut out of the head the face is clearer and the details of the eyes, nose, and mouth are defined. 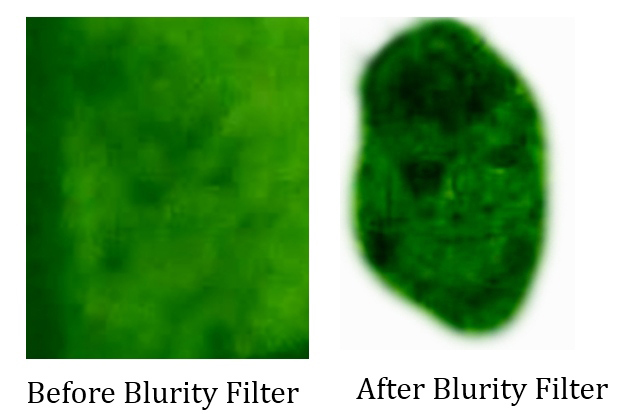 Below are still captures from an unposted video. This Bigfoot was hiding behind me and though you could see the general face no detail was visible. After the Blurity filter has been applied the eyes become very distinct along with the hair line and general shape of the face.

Thanks to the "Blurity" software many of the "BlobSqautches" are being transformed into "Bigfoot".