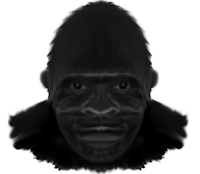 I have been asked many times what does a Bigfoot look like, how big are they what color is their hair, etc. I thought I would give you what the Bigfoot in my research area look like. This is totally based on my personal experience, research, and local eyewitness reports. Some characteristics of the Bigfoot in East Tennessee are unique to the Southern United States while others seem to be shared by Bigfoot nation wide. 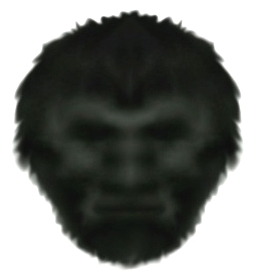 The heads are round, the brow is heavy and protruding, the eyes are deep set and are hard to see when looking straight at the face, The hair on most is groomed to be off the brow, it many times follows the brow line which gives the Bigfoot a raccoon or what I call the “Eddie Munster” look. Facial hair varies from none at all to almost full coverage. On average the nose is wide and flat, but a few have “human looking” noses that are thinner. The mouths are wider than a human and the teeth are large but square. The check bones are usually high – appear to have a Native American genetics mixed in, I have heard witnesses say except for the brow they looked like and “old stoic Indian”. The lips are thin on most.

Wide shoulders-appears if they are wearing football shoulder pads, arms that hang down around the knees. No visible neck, the head appears to sit right on top of the shoulders. The heads are round facial hair varies among individual.

Language:
Mumblings, Samurai Chatter, on one occasion a single spoken word: “Jerahoe”, and yelling in an unknown language (recording authenticated and transcribed by Scott Nelson) 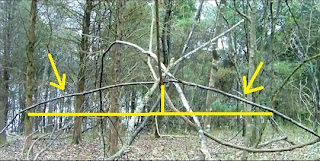 Gifts given to me: