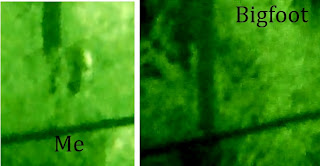 I have posted the footage of a Bigfoot hiding in the back yard on my YouTube Channel. The footage was captured using a night vision scope with a HD video camera attached to the eye piece. The video is a little long but I wanted to give you a full explanation and thorough follow-up.


CLICK ON READ MORE for back ground info on this video

I have been experiencing visitations at my home for almost two years. I have documented footprints (16-22 inch), hand prints on the siding of my home and on dog food storage tubs, recorded audio, gathered hair samples, and saliva samples. Two of my neighbors have seen it. One watched it run across her back yard in August of 2011, called the police, described it as a "teenager in a black hoodie, 6 feet tall, ran faster than anything she has ever seen". When I talked to her she said "IT" when describing the intruder. She also had all her motion sensors knocked out of her lights, not the lights but he sensors.

Another neighbor was having a night time cook out with friends. One of the wives noticed something in a tree watching them from my back yard. My neighbor who is a police officer retrieved his gun and flash light. Ordered the "kid in the black hoodie" to come down, it jumper out of the tree at over 15 feet, hit the ground "running faster than Ive ever witnessed a person run".

A family up the street has called the police repeatedly for a "peeping tom" that looks into the window of their 16 year old daughter. He is described as a "skinny teenager, about 6 feet, black pants, wearing a black hoodie".

This video was not some random event, with no back ground or history. In fact I cut the video off when I was talking to my neighbor out of respect for her privacy, but she told me in our conversation that she had seen someone "lurking" in that area the same night!! So I have an independent eye witness that places the subject in that area the night of the filming.