Stick Structures - What Are They and What Do They Mean?

"Stick Structures" are a interesting phenomenon. Some say they are just a "act of nature" while others see any "X" in the woods as a stick structure. I think most are just that, random formations, but I think a few are the "real deal".


I have found two structures in the last three years that I was confident were constructed by a Bigfoot (s). Both structures were a X with a stick balanced in the middle. The formation formed a asterisks.The part of the stick structure I find difficult to explain is the stick balanced and under the other two sticks that form the X. How does this happen by coincidence, twice? 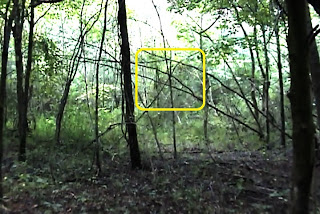 I found the first stick structure like this in August of 2009. A X was formed with a sapling balanced in the middle.

The most interesting thing about the stick structure was how the saplings were “weaved” in the Y notch live sapling. 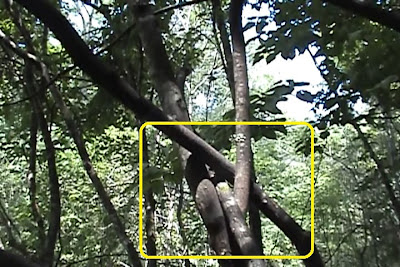 Placed above the Y notch there was another sapling marked by the yellow box in the below photograph. 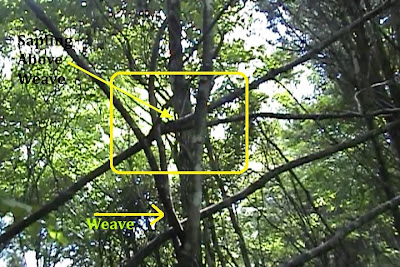 This structure was beside a "high head clearance" trail.


The second structure was even more amazing. I had built my own stick structure and put a trail camera watching to get a reaction from the Bigfoot. I come back to the remote area a week later and find a asterisks stick structure beside my stick structure just out of camera range. It had a large sapling balanced perfectly in the middle of the X. 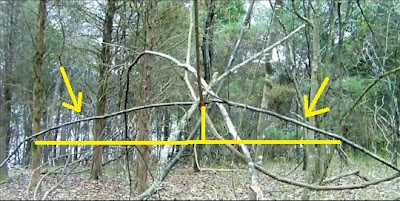 I sometimes wonder if the Bigfoot looked at my effort and decided to show me how it was done.


There are other stick structures reported from across the country. T-Pee like structures, X's, blinds, and shelters.

I can only speculate at this time what the asterisk  means. Is it a trail marker or maybe a territorial marker? I have built my own structures mimicking the asterisk but they receive little activity. Only once did I get any reaction from a stick structure I had built. Early in my research in November of 2009 I had built a T-Pee type structure in the notch of a small tree. I also put some polished rocks in the Y notch.

It was obvious something was not pleased with my efforts. The structure was totally destroyed. The polished rocks were also missing.

This was the only time I had any reaction to any stick structure I have constructed. I can only assume either the location made them upset or the type of structure I built. Maybe they thought I was encroaching on their territory. I later built other structures in this area but they have all been left alone.


So for now they remain a mystery. They are more clues is this big puzzle that is Bigfoot Research.