Redchun is one of the most underrated researchers in the Bigfoot Community. He is persistent, hard working, and his work with the "PlotWatcher" game cameras is paying off. 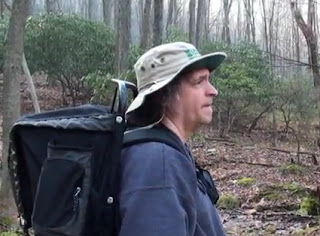 I go back to the area where I believe I filmed a bigfoot behind a boulder in 2010 to set a Plot Watcher trail cam for a few days.The cam was there for 4 days.The footage is inconclusive,I know but I thought it was interesting.What I have is deer running down the hill towards the subjects that seem to be hiding.The subject or subjects jump up and the deer run back up from where they came from.This all happened on an old logging road where the two roads intersect and cross each other.


This is footage taken from my PlotWatcher Pro Trail Cam.The pics were taken on a rainy evening on May 13.This is the same place where I caught the unknown subject from a previous video.The footage is zoomed in and repeated so you can see the movement.I don`t know what the thing is in this video

I was contacted by a local researcher who knew me from youtube and we hooked up to do some researching in my area.We started out early and walked a round trip of roughly 4.5-5miles.I did a loud whoop or two just for kicks as we were walking a small power line.Later as we entered the woods we were hit with a loud long whoop in front of us.We were both caught off guard.I thought it sounded like the whoop I gave earlier.Then a few coyotes just went nuts.I was using my nightvision at the time which does not record audio.My friend Bob grabbed for his voice recorder and caught some of the action.We could here what sounded like long howls or screams far off in the distance either from down the long ravine we were standing on top of or a distant mountain side to our front.We are not sure what was making those howls.I am trying to clear up some of the audio the best I can for a future video.Thanks to Bob for his quick action!
http://www.youtube.com/watch?v=mEzJELxMPo4&list=UUK-PHF-oY5IVHNRQOJNrnlQ&index=3&feature=plcp


Researching my area the day before buck season.I went out to check my trail cams and look for prints.I found a trackway of unidentifiable prints or impressions coming down a hill towards a creek.It started raining hard so I took a dirt road to a section of hemlocks and waited for about an hour under the trees watching a wooded valley before calling it a day.Just a typical video showing what I do out there.
http://www.youtube.com/watch?v=zqHNdDsLgLE&list=UUK-PHF-oY5IVHNRQOJNrnlQ&index=8&feature=plcp


This is the movement I saw when out in the woods.It is the best I could do.I know it is inconclusive.
http://www.youtube.com/watch?v=tCTLXWl_D6s&list=UUK-PHF-oY5IVHNRQOJNrnlQ&index=9&feature=plcp


I have been looking at this footage and found movement behind the main subject.It looks like something appears behind some brush or rocks.It also appears to get up and walk away,notice the arm movement
http://www.youtube.com/watch?v=b_yTmczrMJo&feature=plcp


know this is horrible footage but giving the distance and dark woods it was in,there is not much else I can do.I am trying to get a few clear shots and post them.While viewing my footage I noticed a dark area back in the woods where I smelled a wet moldy animal smell and heard movement.I zoomed in and lightened it up and saw what looks like a squatch on all fours.I thought I would share it with you all.Yes it is blurry.I can`t do much more with it but I find it interesting.Thanks!
http://www.youtube.com/watch?v=1yMqiUXesgg&feature=plcp


I went out to check my trail cams and found possible prints.I ended up in a ravine by a creek.I smelled what I call a wet dog or animal scent.I heard movement.I went towards it and had something land behind me,freaked me out! I filmed down the ravine and caught the image of a head from the nose up peering over a small boulder.This area was very dark.I had to lighten the pics
http://www.youtube.com/watch?v=ksTfdEbvgOA&feature=plcp
Clips and stills from some of my research
http://www.youtube.com/watch?v=l7WXL5JTRRg&feature=plcp


Enhanced audio from a video of mine.I was tracking some large impressions that led me to a small ravine next to a creek.It was real thick there and I was on my knees ready to give up and walk about a mile back to my truck when this happened.I was unarmed at the time and pretty freaked out.I have no idea what was breaking these branches
http://www.youtube.com/watch?v=8uC-mqEDJ6A&feature=plcp


I spotted this guy about 150yds up a steep cliff.I watched him for about 5hrs.He was laying back and sitting up and I have footage of him eating.I filmed alot this day and most of the footage is useless because of distance.I am sifting through it now to get what I can out of it.Thanks!
http://www.youtube.com/watch?v=QrYYFNVAmKk&feature=plcp


I picked this side profile out of my bigfoot footage.Thanks for watching!
http://www.youtube.com/watch?v=nsbu1jXGcq4&feature=plcp


This is a portion from the video called Bigfoot Watching Me?I could not get any clear shots because of the heavy rain distorting the clarity.I do this basically for myself but thought I would share it with you all.
http://www.youtube.com/watch?v=LNehqkmmkXU&feature=plcp


This is an enhanced portion of one of my video`s.On this day I was following what looked like a trackway going through some thick brush near a creek.I went as far as I could go before hitting a back road.When limbs started breaking and I could hear movement ahead of me
http://www.youtube.com/watch?v=XWsIfxcTAb0&feature=plcp
This is a sound enhanced clip taken from my video Bigfoot Research-Recent Sighting Area.A few viewers ask me if I can enhance the sound and I just figured out how to do it.This area I seem to get things tossed at me from the cliff near by but not sure.If you listen,you can hear me sniff in the beginning.I had that weird smell thing going on
http://www.youtube.com/watch?v=zzDJL4hgxU8&feature=plcp
I went out on a rainy day to research in my area.It has been raining for days and the temp.was 48 deg.The creek was muddy and high.I have to cross this creek on a fallen dead tree to get to my trail cam.When crossing I jumped to the shoreline and my cam fell off of my belt and sunk in the water.It was in the case but the cam was filled with water.I found a cave overhang and went in to dry off for about 1 1/2hrs.I decided to leave and started out but stopped when I saw something black move on the other hillside.I stood there and watched.I had a rain poncho on and I had a hard time hearing and seeing from the rain pounding on me.I looked back to the area where I saw the movement and saw a black object behind a boulder.I took my eyes off of it to look behind me and when I turned around,the object was gone.Then I could see a little bit of the object rising over the boulder.I took my eyes off of it again and when I turned back to it,I saw a full head and chest and shoulders of the bigfoot.I stood there staring at it for about 15-20 min.I didn`t want to use my cam in fear of it shorting out.I decided to try it and filmed a little before shutting it off.I was not sure at the time if it even worked.This is all I filmed the whole day.I got real nervous and headed toward my truck a mile away.The video is blurry and I couldn`t focus.I realized I blew a great chance to get good footage
http://www.youtube.com/watch?v=-RBmE-hU4vE&feature=plcp


In this video I go back to where I saw this being watching me from behind a rock.I was surprised to see that the rock was huge and it had a nice hiding area behind it
http://www.youtube.com/watch?v=AAZ9Ua1Zf_s&feature=plcp


Some viewers requested to see what I get on my trail cams.I can`t figure out the one pic
http://www.youtube.com/watch?v=PppofVUhrDg&feature=plcp
Posted by Joe Black at 12:26 PM