In a recent article, the UK MIRROR, published a story and footage detailing my Dogman encounter from 2011. (Click Here to read the article) The article is not entirely accurate concerning my reaction and the exact events surrounding the capture of the video. Below is the complete encounter with detailed video analysis.

I am standing on the shore of the lake using my mono-pod mounted video camera to search the small island approximately sixty feet off the main land. The foliage on both sides of the trail is extremely heavy. I actually have over hanging limbs touching the top of my head. I am in deep concentration slowly filming the adjacent shoreline looking for a possible Bigfoot.

Unknown to me, the Dogman that was observing me at the feeding station, has followed me to the water’s edge. The creature has risen up only four feet behind me in the midst of a small Cedar tree. The Dogman is on the right side of the trail and my back trail camera is mounted on my left shoulder. I do not capture any footage of the creature while I am facing forward. When I decide I am done filming the island I start to turn to my left. I turn about forty-five degrees then stop for approximately six seconds. During these six seconds the Dogman is being captured on my back trail camera.

The Dogman “nervously” rocks back and forth attempting to anticipate my movement. After the six second pause I turn my shoulders further to my left and the Dogman ducks down into the heavy foliage but does not retreat. I pause again for approximately nine seconds then complete my turn. During the second nine second pause the Dogman’s dark form is visible through the heavy foliage.

Once I complete my turn I get the strange feeling I am being watched. I pause momentarily and look in the exact area where the Dogman has just ducked down. I take my mono-pod mounted camera and film this area for approximately ten seconds. I do not see anything and after the short pause I began walking away from the area. When I review the mono-pod camera footage, a faint dark shape is still visible in the dense foliage. I think I was fortunate not to see the Dogman that day!

The rest of the outing went without incident. The following day I was reviewing the back trail camera footage in the comfort of my home. I remember seeing the strangely shaped creature rock back and forth as I turned my shoulders and saying to myself “what the heck was that!” I replayed the video over again this time stepping through the footage slowly. I could not believe my eyes. What was this strange thing and how did it get this close to me without making any noise? Is this a weird looking Bigfoot? I did not know that the Dogman even existed at this time. 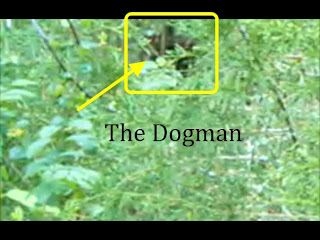 I then loaded the footage into my video editor. I cropped around the subject and enlarged it two hundred percent. Then I adjusted the contrast and the brightness and when I played the enhanced footage back in slow motion I was horrified! I actually felt physically ill. I remember gasping and groaning out loud as I watched this “other worldly” creature moving behind me and thinking, “This thing could have killed me! It was only four of five feet behind me!”

I called to my wife to come look at the footage. When she entered the room she immediately asked me what was wrong. She said I looked extremely upset.  I was almost speechless and told her “just watch, just watch this and tell me what you see.” I watched as the color left her face and she gasped openly, “What in God’s name is that thing?” she asked, “Where is this, where did this come from?” I told her I took the video at the public research location the day before. She then remarked, “Never go there alone and always take your gun that is a monster! No maybe a Werewolf or something evil!” I definitely agreed with her concerning taking on a research partner and carrying a firearm. 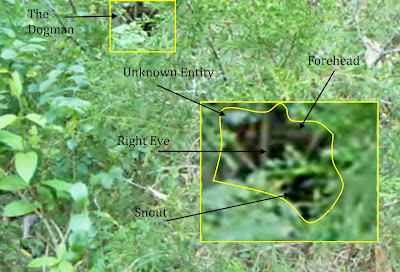 It took me several weeks to process what I had captured on video.  I was genuinely afraid to go back into the woods. The more I researched this creature the more I realized how fortunate I was to have come home from the woods that day. I spent the next month investigating the Dogman. I reached out to Linda Godfrey who is the modern expert on the Dogman creature. She was very helpful and was intrigued by the video.

She assured me she had no knowledge of anyone being harmed by a Dogman. I wish I could say this was reassuring but having the footage and being the one that was so close to the creature that statement gave me little comfort. 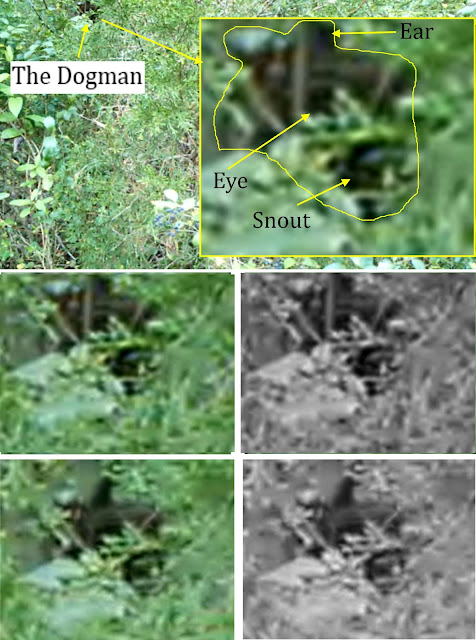