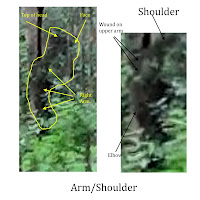 Some “genetic experts” are claiming that the DNA sequences that were extracted by Dr. Ketchum are nothing more than mis-identification of common animals because parts of the genome match common animals like possum, bear, coyote, etc. They also claim that any human results must be the result of contamination. This is disingenuous and misleading (A Lie). The “genetic experts” are relying on the general public’s ignorance of genetics to confuse and misrepresent the facts. It has become the latest tactic the critics of the Ketchum DNA Study use to attempt the discredit the study.
The fact is many organisms on this planet share many of the same DNA sequences. The critics are only looking at select sequence of the Ketchum genome and declaring it is a “known animal”. They are not looking at the genome as a whole. Here are some interesting FACTS about the genetic similarity between humans and animals:

Dr. Ketchum discovered that the Sasquatch is a hybrid. The mitochondrial DNA which comes from the mother is 100% human but the nuclear DNA which comes from the father is unique or “novel”. This means when Dr. Ketchum extracted the nuclear DNA and used an industry accepted software program that compared the Sasquatch nuclear DNA to ALL the DNA sequences in Genbank. The application is known as BLAST (Basic Local Alignment Search Tool). Genbank contains 152,599,230,112 base pairs.
( http://en.wikipedia.org/wiki/GenBank)

NO match was found for the nuclear DNA, I say again NO MATCH.
When a “genetic expert” claims he has looked at the 3 complete Sasquatch genomes Dr. Ketchum published and he found sequences similar to a possum, bear, dog etc. and that this means the DNA has been “misidentified” or that Dr. Ketchum is “hoaxing her results” then he is misleading you! For all intensive purposes he is lying to you! He is using the fact that a high percentage of the DNA sequences in ALL animals/humans are similar and playing off the general public’s ignorance of this fact to lie and mislead people.

To claim that the DNA is from a common known animal and that the DNA study is a “hoax” or a “ruse” also calls into question the integrity of the Southwestern Institute of Forensic Sciences (Dallas, TX) and David W. Spense. He did the hair analysis and is used regularly in criminal cases as a hair expert in the state of Texas. He would risk his entire career and give many convicted criminals grounds for appeal if he “misidentified” the hair samples in the DNA study. Not to mention if he was part of a “hoax”. He was the “gate keeper”. Mr. Spense would look at each hair sample and if it was not “Sasquatch” or “unknown” compared to his vast database of animal hairs then it was discarded. DNA testing is EXPENSIVE coming in at $10,000 per test. They were not going to run DNA analysis on known hairs from a common animal!

During the DNA study one of the reference laboratory used for the “blind study” portion of the testing gave Dr. Kethcum issues over the results. After running the sequences the lab became curious because of the “odd nature” of the results. So they ran the DNA sequences through a BLAST search and when it did not match anything in the Genbank database they contacted Dr. Ketchum and asked her “what or where did this DNA come from?”

When Dr. Ketchum informed them the sample was from a suspected Sasquatch the lab director became very upset and refused to provide the results of the test back to Dr. Ketchum even though they had been paid for them! Dr. Ketchum had to retain an attorney and threaten to sue the laboratory for breach of contract in order to get the results she paid for! Why would a lab refuse to give her the results and risk being sued if the DNA results had come from a common animal???

And if you still think that these “genetic experts” are not misleading you and that the DNA study is just common animal DNA mixed with human contamination read the following statement by Robert Lindsay. Oh and by the way he is not a “fan” of Dr. Ketchum, in fact many times he is/was her harshest critic!
Robert Lindsay (http://robertlindsay.wordpress.com/)

"No contamination in Ketchum DNA findings. There is some little-known evidence that there is no contamination in her samples: Ketchum tested the Bigfoot nuDNA for several human genes, the names of which you can find in the manuscript. MC1R (human/Neanderthal red-hair color gene) showed up in the Bigfoot nuDNA as did the human antigen gene TAP1 (most of the time) and the jaw muscle gene MYH16 (which when present showed only a human profile rather than an ape one).

Not discussed in the manuscript are the tests Ketchum did for the TYR gene, which is associated with skin pigmentation, and the HAR1 gene, which is a “human accelerated region” associated with human neurological development. The human skin color gene TYR and human brain gene HAR1 were not found in Bigfoot nuDNA. Now that in and of itself is very interesting.

If the samples really were just bear or coyote or bobcat smeared with human contamination, all of the human genes should show up all over the place. The peer-reviewers for Ketchum’s manuscript only wanted positive, not negative, results included for gene tests, so the TYR and HAR1 data are not discussed in the manuscript. However, you can see the remnants of it in the Supplemental Data 12 appendix. The bottom line is the Bigfoot nuDNA is missing some important human genes that should be there if the nuDNA were in fact simply contaminated with human DNA.

Furthermore, if the samples were simply bears, coyotes or whatever with no human contamination present, the human genes listed above would not be there at all.

So the critics and so called “gentic experts” can understand the DNA study I provide the following:

The Ketchum DNA Study for Dummies
Definition of terms:
All cells in the body contain a complete set of DNA instructions regardless of the function of the cell.
There are two types of is DNA – Nuclear and Mitochondrial.
Mitochondrial DNA is found in cell mitochondria and is from the mother only.
Nuclear DNA if found in the cell nucleus and is a combination of genetic code from both the father and the mother.
Genbank is a institution that collects and stores DNA sequences for ALL life forms on the planet. Once a DNA sequence is placed into the database comparative analysis can be run on it using a special software program called BLAST.
BLAST is a software engine that compares a DNA sequence against all the DNA sequences stored in the Genbank database and reports any matches from this database. 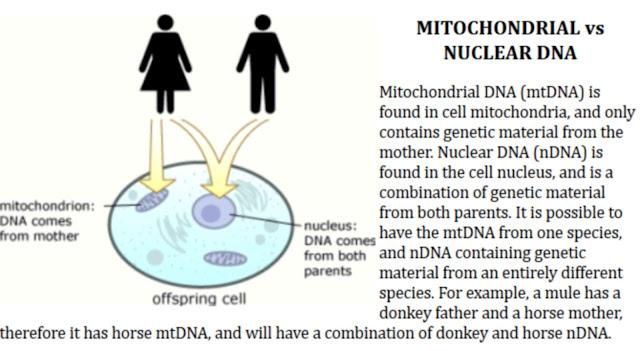 Three DNA samples were collected and completely sequenced. This means a complete genetic profile of both the Mitochondrial DNA and Nuclear DNA was produced.
Sample 26 -  A piece of flesh, hide, and hair reported to be from Bigfoot that was shot in Northern California. 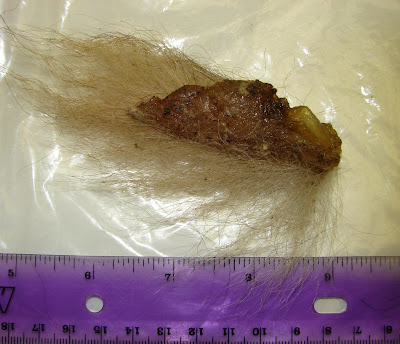 Sample 31 - Blood collected from a plate that had sand paper on it to cut the tongue when the Bigfoot licked it. This was collected in Alabama by the Erickson Project under the supervision of a PhD in wildlife biology. 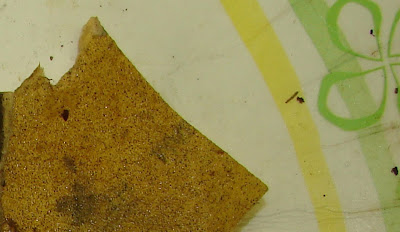 Sample 140 - Blood collected of a down spout that had been bitten into and punctured. (Please tell me if you know of any humans that could or would bite into an aluminum downspout and puncture it with their teeth.)  This sample was collected in Illinois. 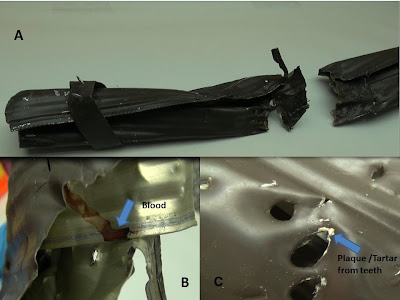 Dr. Ketchum was able to extract good quality DNA from these three samples. The samples were good enough to run through a machine called a HiSeq 2000. This machine will sequence the DNA and produce what is known as a DNA profile or complete Genome. Once she had her sequences she compared the Mitochondrial DNA to the Genbank and found that this DNA was 100% human in all three samples. This means it could not be from an animal or an ape. She then compared the Nuclear DNA to the Genbank and she could not find a match for any of the three samples. This means that she had a life form that had a human mother and a father that was not in the known genetic database.

Dr. Ketchum began comparing sections of the Nuclear DNA to human DNA to find out where it was different. All humans have the TYR gene, which is associated with skin pigmentation, and the HAR1 gene, which is a “human accelerated region” associated with human neurological development. She found that the Sasquatch DNA from all three samples lacked these gene sequences. This means that the father could not be human as we know it!  Dr. Ketchum and the entire DNA project team has discovered a completely new and never before seen life form or hominin. When she compared the samples to each other they were a match or better from the same family or type of hominin.

The DNA Study collected three samples for DNA, one flesh sample and two blood samples. The samples were collected at different times in three distinct regions of the country. The Mitochondrial DNA was human in all three samples which rules out animal or ape. The Nuclear DNA from all three samples did not match any DNA in the Genbank DNA database which contains 152,599,230,112 base pairs. The Nuclear DNA of the three samples does not contain the TYR Gene or the HAR1 Gene which ALL humans have so the father is not human and the DNA sample CAN NOT be contaminated by a human source since these genes are missing. If there was contamination the HAR1 and TYR gene would be present in the sequences.

There is an unknown hominin in the United States of America that is a human hybrid. The mother is of human origin and the father is a non-human of unknown origin. Since eye witnesses saw the donor of sample 26 and sample 31 and they described the donors as being hair covered, bipedal, and in general appearance looking like the cryptid known as the Sasquatch, we can logically make the conclusion that the DNA is from a Sasquatch.

Please note: The Ketchum DNA Study contained a total of 113 DNA samples extracted from sources to include hair tags, saliva, blood, etc. The three samples mentioned above were of high enough quality for complete DNA sequencing. The complete study includes the hair morphology and other factors that show that these samples were from a unknown hominin.  I chose the three samples above to demonstrate the validity of the study because they were complete genomes. Below is a statement from the DNA study itself:

Here we report the morphological and histopathologic examination, whole mitochondrial and nuclear DNA sequencing and analysis, and electron microscopic studies of DNA extracted from fresh hominin tissue.
Overall the data are suggestive of an unusual contemporary hominin with mitochondrial DNA consistent with modern humans but showing marked anomalies in the nuclear DNA. These findings suggest the existence of a novel contemporary indigenous North American hominin.