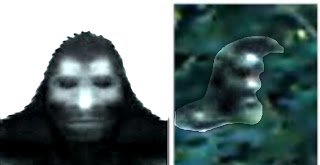 Thom Powell wrote a well reasoned  blog post in support of the Ketchum DNA study. He also agreed with my assertions that Justin Smeja submitted different samples to Bart Cutino for his "independent DNA testing" and that he did it to avoid possible legal prosecution for  "accidentally killing a human being". He also brought up what he calls the "Tribe". This is the group of bigfoot researchers and supposed bigfoot and/or cryptid groups that savagely attack anyone that puts forth any evidence that Bigfoot is not an ape or has a view point that they do not agree with. Below is Powell's statement:

"Meanwhile, anyone who attempts to challenge the groupthink by endorsing the new idea or new evidence is roundly dismissed with pat turns-of-phrase like: ‘They drank the Kool-aid’ (a crass reference to the members of James Jones’ cult who committed mass suicide in Guyana). In truth, the groupthinkers are the cult, consisting of the vocal critics who will not examine the ideas on the basis of their merits, and those who fall in line behind them for fear of becoming outcasts from the 'bigfoot researcher tribe."
I know you are not suppose to "name names" but since the "Tribe" has no problem calling me names like "liar", "crazy", "hoaxer", "mentally unstable", "idiot", etc. I thought I would define what organizations I consider part of this attack machine known as the "Tribe". TeamTazer, Bigfoot Lunch Club, Bigfoot Evidence, and Cryptomundo are the "heavy hitters" in the Tribe. They all seem to agree and like a tribe or better a herd they appear to have the same talking points when it comes to attacking the Ketchum DNA Study and those of us who support it.
Since Thom has friends associated with many of these groups he is getting "kid glove" treatment which is understandable.

Crytpmundo had this to say: "We didn’t agree much over the phone, but if I’m honest, his blog post affords him greater ability to make his points. Points of which I still disagree with, but I do have some favorite parts. I loved his synopsis."

Unfortunately other groups or individuals that have supported the Ketchum DNA Study have not been treated so kindly by the Tribe.

It is unfortunate that there is such a "rift" in the Bigfoot research community. It would be refreshing if we could debate competing opinions without personal attacks, misleading the public, or flat out lying, but the Tribe appears to have so much invested in their agendas that this is not possible.

I will continue to defend the TRUTH. I will continue to present my opinion backed up with the FACTS. Unlike the Tribe I will provide documentation, references, and independent confirmation. I will tell you the truth and let you decide. I will also encourage you not to take my word for it but do  your own independent research. Knowledge is the key, do not let the tribe take advantage of your ignorance like they do the general public. Arm yourself with the facts.

The scientific support for the Ketchum DNA paper continues to grow. Now that the independent reviews are coming back in support of  the papers findings I anticipate the Tribe will go on the attack again. When they do I will be right here armed with the TRUTH and the FACTS. Ready to do battle with the Tribe!