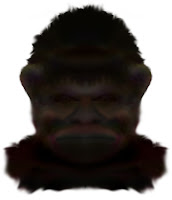 May of 2000 my wife had a young Bigfoot encounter in our front yard. Before I go on I would like to describe were my home is:  We live about ten miles outside of Oxford, NC and at the time you could not see our home from The main road. The home was surrounded by a old growth forest. My nearest neighbor to my left is about a 175 yards away and at the time my nearest neighbor to my right was about 400 yards away. Granville County is a very rural County.

On that day in question, it was a warm, clear day. My wife was on the front porch and it was later on in the afternoon and I was on your back deck. All of a sudden she came running through the house screaming for me to come to the front porch and see what was out there. By the time I got there what ever it was,was gone.
I asked her what had she seen. She said, Don a creature about 3 or 3.5 ft. tall came running out into the yard a few feet and turned and ran back into the woods.I asked her to describe what she had seen. My wife said it was cover in dark brown or black hair with long arms waving above it's head. I asked to show me where it had come out. She said between a large oak and the grape vine.So I went to the spot and looked into the woods and saw nothing.That night we talked about it and did so for the next few days and then dropped it.
I did not say a word to our neighbors. A year earlier I had told some neighbors I had seen a coyote crossing a neighbors cow pasture. I was ridiculed for making such a statement. Guess what you hear behind my house now at night,COYOTES.
Last November 2012 I was looking for  Weatherby .300 magnum. I went on Armslist.com and found one. I emailed the guy and two days later he called me. He said his name was Kenneth and that the rifle was like new. With only 6 to 8 rounds fired through it. We agreed to met that upcoming Friday afternoon. Also learned that he only lived 15 miles away in Wilton,NC. Friday came, I called and he was there. I punched his address into my Garmin and drove to his house.
When I got to his new neighborhood, I noticed it had been carved out of old growth forest. I found his house, we introduced each other and I bought the rifle. We stood around exchanging hunting stories and topic changed to who was in the Americas first. He was interested so, I gave him two sites to go to, Kennewick Man video and Solutreans. I then asked him had he seen the new Utah Bigfoot video that had gone viral on the internet, Kenneth said no. I told him I would give him some Bigfoot video sites to go to.
Kenneth got kind of quiet, then said Don I am about to tell you something  my wife and I haven't told anyone about. He said two weeks after they had moved in, it was late in the afternoon and his wife was in the hot tube on their back deck. He was taking a nap because he had to go into work early that morning.The next thing he knew was, that his wife was screaming through the house for him to go out on the deck and see what it was standing at the end of their house. When he got there what ever she had seen was gone. Kenneth asked what had she seen. His wife said she was looking over her shoulder and saw something about 3.5 to 4 ft. tall, with long brown hair covering it's body. She also said it had long arms by it's side and it's hands were beside it's knees. My jaw hit Kenneth's driveway and I told him, my wife had seen the same thing.I told him what my wife had seen.
Posted by Joe Black at 6:43 PM