Bigfoot Is In The Eye Of The Beholder

In 2009 I captured a black and white video of what I maintain is a infant Bigfoot. I did exhaustive follow-up on the video. I had the angles and measurements so using some good old-fashioned algebra I was able to accurately determine the size of the subject’s head and the body height. To this day the video still gets hits and is still controversial. The interesting aspect of the video is the diverse range of comments I receive. Almost everyone sees something different. There is no argument something is there, but what is there is the subject of debate.


I of course see an infant Bigfoot, but others claim to see a diverse range of animals and that is the interesting aspect. I have received comments from people who claim to be “Life Long Hunters”, “Expert Woodsmen”, “Wild Life Biologist”,  “Forensic Experts”, “spent all my time in the woods”, “Raccoon Hunters”, and of course “Bigfoot Experts”. Most will guess an animal they are familiar with while others seem to just pull something out of the hat and toss it out there, but many of the commenters claim it can not be a Bigfoot because “that is not what they look like”, “everyone knows they don’t exist”, or my favorite one “I do not know what a Bigfoot looks like, but I know that is not it!”.

Even though I have demonstrated the head of the subject to be at least eight inches across commenter after commenter will claim it’s a small rodent which head never grows bigger than two inches.

It appears that people are going to form their opinions regardless of the facts. As the old saying goes, “don’t tell me the facts, that will get in the way of my opinion”. I have found that most people bring their predisposed biases with them and look at everything through that filter. What I see as a Bigfoot others see known animals or if it cannot be explained as a known animal then it must be a hoax.

The below collage compares a still capture from the game camera footage that I contend is an Infant Bigfoot to a variety of animals commenters have claimed the subject to be. (The monkey comparison is the only plausible explanation that I can see other than a Bigfoot. I contacted animal control in that county and no pet monkeys were reported missing at that time and there were no reports of people seeing a monkey.) 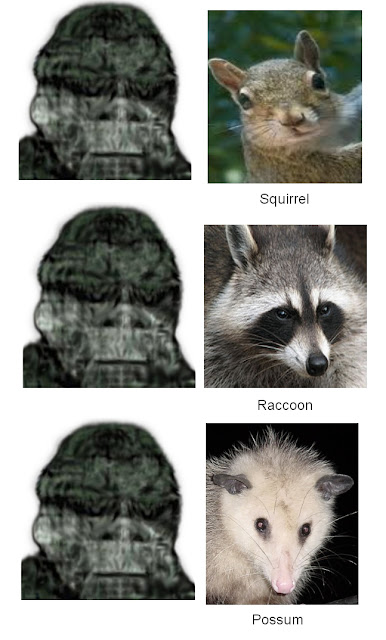 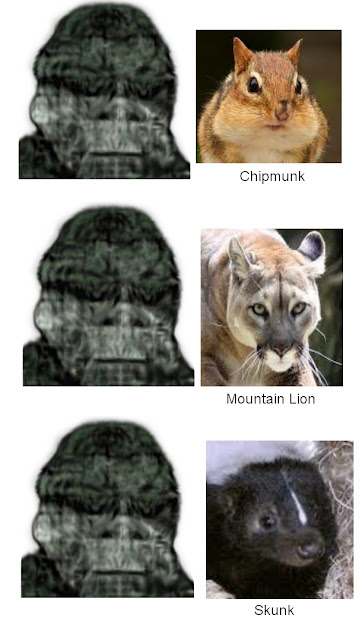 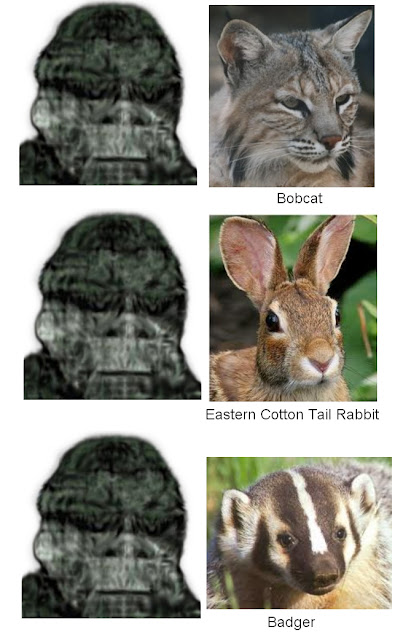 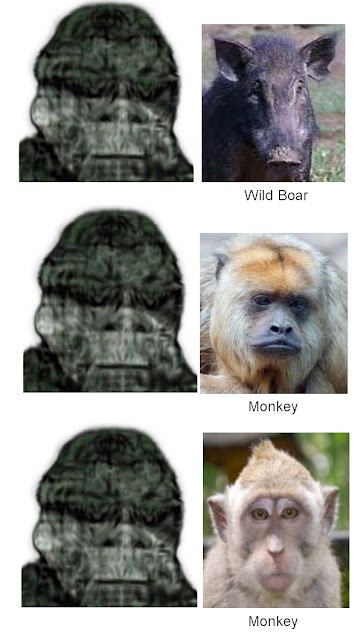 I often wonder what it will take in a video to satisfy people? The debate still rages over the P&G film. In this age of CGI no one trust the images or videos that are posted. In the end we all see what we want to see. I see Bigfoot you see squirrels. The only way to truly satisfy most of the people is to present a complete body of information, clear video and DNA. Yet there are still some that will not be satisfied until a live or dead specimen is produced.

I cannot complain too loudly because I am guilty from time to time of not seeing what other people see. On many occasions I am sent videos and pictures that the owners claim show a Bigfoot. I will look at them and will not see anything even remotely looking like a Bigfoot. I will be honest and tell them I do not see anything to which they reply “It is plain as day! Its right here!!, I can’t believe you of all people can’t see that!!!”. So I try not to get frustrated when others only see shadows, limbs, and leafs blowing in the wind.

Until the body shows up or the DNA study is published we will continue rolling around in the muck of debate, controversy, and derision. I hope one day the issue will be settled but for now I’ll keep posting my videos of the giant four foot squirrels with eight inch heads.